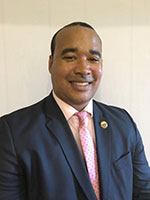 A community affairs liaison officer with the 26th precinct in Harlem, Mr. Belk graduated from Herkimer College with an associate in science degree in Criminal Justice before moving on to the University of Hartford in Connecticut to continue his education. A member of the basketball team at both Herkimer and Hartford, he credits his professors and coaches as his main supporters and mentors. Recognized for his volunteerism, Mr. Belk has played an integral role in volunteer projects aimed at weeding out negative actions in communities and replacing them with positive, productive action. His mission has always been to give his communities the resources to be proactive. His message is always simply, “Give it Back.”