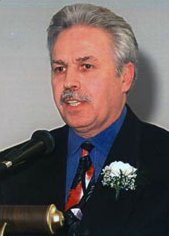 A native of Utica, New York, Bill Plante has devoted his life to teaching and coaching. He has earned a statewide reputation as a noted physical education teacher and administrator. After graduating from Herkimer College, he transferred to SUNY Cortland, where he completed his bachelors and masters degree while playing in goal for the Red Dragons. Bill is regarded as one of the most successful high school ice hockey coaches in New York State history, leading the Salmon River Central School Shamrocks to six New York State championships since 1979. Still active, his teams have amassed over 475 wins, winning 17 Sectional Titles. Known for their spirit of cooperation and strong character, the Salmon River Hockey Team, over half of whom are Native Americans, has earned the highest national ranking ever achieved by any New York State team.

Bill founded the N.Y.S. High School Hockey Coaches Association and prior to serving as its president, was named the first-ever N.Y.S. Coach of the Year. He has initiated athletic and academic scholarships for student athletes, directing several hockey and all sport schools throughout the Northeast each summer. While in Herkimer, Bill participated in baseball and hockey, and is a past inductee of the New York State Coaches Association Honors Club, the Greater Utica Sports Hall of Fame, and the SUNYIT Wildcats Hall of Fame. He is married to Susan Plante and they have two children, Marc and Raquel.