Herkimer College was well-represented among the honorees at the Genesis Group’s annual Celebration of Education awards ceremony held on November 17 at the Hart’s Hill Inn, Whitesboro.

Mary Ann Carroll ‘80 was inducted into the Genesis Group’s Hall of Distinction in recognition of her career achievements in education.

Carroll joined the Herkimer College faculty in 1986 and was promoted through the ranks to associate professor in 2004. She has also served in numerous administrative roles including associate dean for the Humanities division, faculty assessment coordinator, assistant dean of academic affairs, and currently she is the associate dean of academic affairs for assessment and institutional effectiveness. She also serves as the College’s accreditation liaison officer to the Middle States Commission on Higher Education. 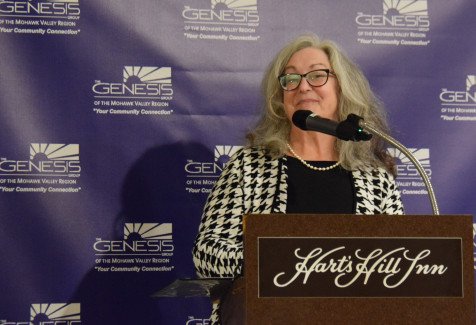 For more than two decades, Carroll, in collaboration with her students and colleagues, planned and produced live and recorded programming, such as NJCAA sports championship game coverage, live concerts, community talk shows, news magazine programs and the College’s Commencement telecast on Herkimer’s HCTV. She partnered with colleagues to help create innovative opportunities for broadcast media students through digital advancements over the years. She also advised students in the Radio-TV Club, General’s Theater Group and Acapella Club.

Among her many accomplishments, Carroll was named to Who’s Who Among America’s Teachers in 1994, 2002 and 2004. She is an award-winning producer, director, videographer, writer and editor with 10 national awards for excellence and distinction, including Telly Awards and The Videographer Awards for multiple documentaries and Christmas music specials.

Dr. Karen Jones ’93, D.P.T. was recognized with an outstanding educator award. Jones joined the Herkimer College faculty 20 years ago. She has been promoted through the ranks, and now holds the highest faculty rank of full professor. Jones began her college education at Herkimer College graduating with the very first Physical Therapist Assistant (PTA) class in 1993. She continued her education at Utica College of Syracuse University where she earned a Bachelor of Science and a Doctorate in Physical Therapy. Dr. Jones was recognized in 2008 with the prestigious SUNY Chancellor’s Award for Excellence in Teaching. In addition to teaching, Jones serves as director of the PTA program. 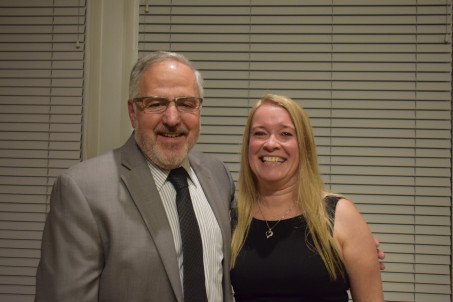 Jones’ success as a teacher can be measured by the success of her students. Graduation rates, pass rates on the Boards, and employment rates for PTA graduates are consistently above 95 percent.  In 2019, the graduation rate for the PTA program was 95.5 percent; the pass rate on the Boards was 100 percent; and the employment rate was 100 percent. Additionally, in 2021 for the first time in the history of the PTA program, one of Jones’ students, Aidan McFerran ‘01, scored a perfect score on the Boards.

The General’s Cupboard provides free food and personal care products for any Herkimer College student who may be experiencing hunger or struggling with financial hardship. All enrolled Herkimer College students are eligible to receive assistance from The General’s Cupboard with no questions asked. There are no income requirements, and students are welcome to “shop” during open hours or confidentially request assistance at any time. 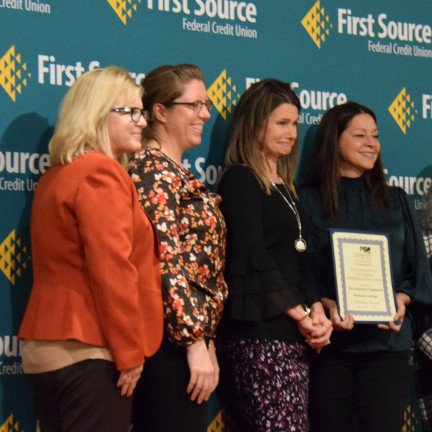 According to the program’s nominator, “the General’s Cupboard staff have worked hard to bring awareness to the issue of food insecurity, to refer students to other available services, while also eliminating the stigma that may come with utilizing a food pantry.”

Mary Ann Carroll accepts her award at the Genesis Group’s Hall Celebration of Education ceremony. Carroll was inducted into the Hall of Distinction in recognition of her distinguished career achievements in education. She is currently Herkimer College’s associate dean of academic affairs for assessment and institutional effectiveness.

Members of the General’s Cupboard committee accept the award for Outstanding Program. The Generals Cupboard provides free food and personal care products for any Herkimer College student who may be experiencing hunger or struggling with financial hardship. Pictured, from left to right, is Rebecca Ruffing, committee chair, along with Vicki Brown, Wendy Marchese, and Paula Fallon.