The Joys and Sorrows is a compilation of published columns in local newspapers dealing with the various holidays. Dark Clouds & Golden Skies includes columns regarding Vietnam combat veterans, Native Americans, and a variety of other topics. Freedoms & Fireworks contains a variety of writings about the 4th of July, including real-life heroes, tragedies, and childhood memories. The fourth book is a compilation of seven original Christmas stories, including “The Snowbird,” “The Candle in the Window,” and “The Littlest Star.” The book covers and many of the stories are illustrated by Lenarcic’s granddaughters Emily Firestone and Lyndsay Snyder along with Benton Hall Academy (Little Falls) principal Joe Long.

In dedicating his books, Lenaric stated “Because I enjoyed every minute that I taught at ‘Harvard on the Hill,’ I have countless memories to help me face the rigors of old age. Wishing the College many more decades of unqualified success.”

Lenarcic also presented the College with a large vinyl banner replicating the Fallen Stars Memorial in honor of New York State’s men and women who died in Iraq and Afghanistan. A committee including Lenarcic and his wife, Kay, were instrumental in creating four memorial murals with binders of biographies to accompany them. Lenarcic credits fellow committee member Kelly Brown with having made it possible for the murals to travel over 12,000 miles to be seen by thousands throughout the state. 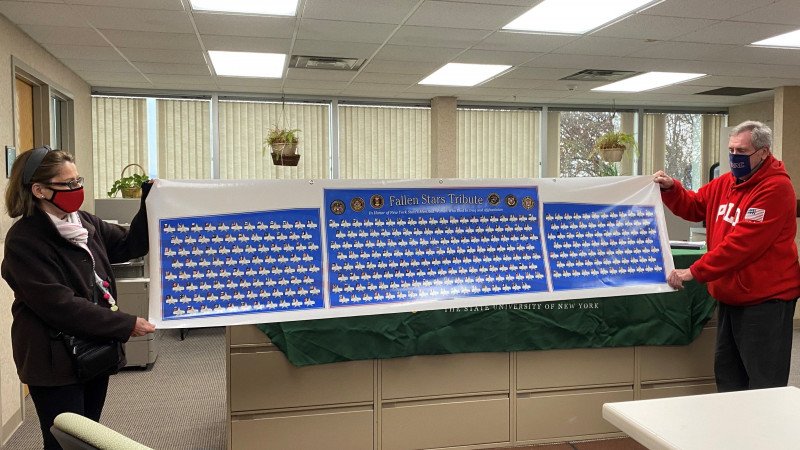 “It is important that every one of these heroes is remembered and that we do something in their names to better our communities – something positive – so that it could never be said that their deaths were in vain,” said Lenarcic.

“On behalf of the college community, I extend my deepest thanks to Ray for his generosity in sharing his collection of personal writings to be enjoyed by students, employees, and community members for many years to come. We also recognize and appreciate Ray’s continued commitment to our veterans and our community, and we look forward to proudly displaying the Fallen Stars banner in a prominent location on campus,” said McColgin.

Lenarcic was one of the original faculty members hired at Herkimer College in 1967. A Chancellor’s Award-winning teacher of history and geography, he also coached several teams including the first undefeated Northeast Collegiate Championship fast-pitch softball team in 1971. He was granted emeritus status by the College Board of Trustees upon his retirement in 1995.