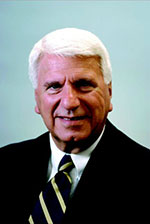 A well-respected attorney, Mr. Snyder served on the College Board of Trustees for more than 22 years, including 12 years as chairman. Under his leadership, the Board made substantial progress in the advancement of the College. He was instrumental in securing funding for the Edward Manning and Shirley Augar Gaynor Science Center. In his commitment to lifelong learning, Mr. Snyder became a student himself at Herkimer College and earned an associate in arts degree in Fine Arts in 2004. In July 2013, the corridor connecting the Library and Johnson Hall was dedicated to Mr. Snyder and named the Donald J. Snyder Corridor, or “Don’s Way.”