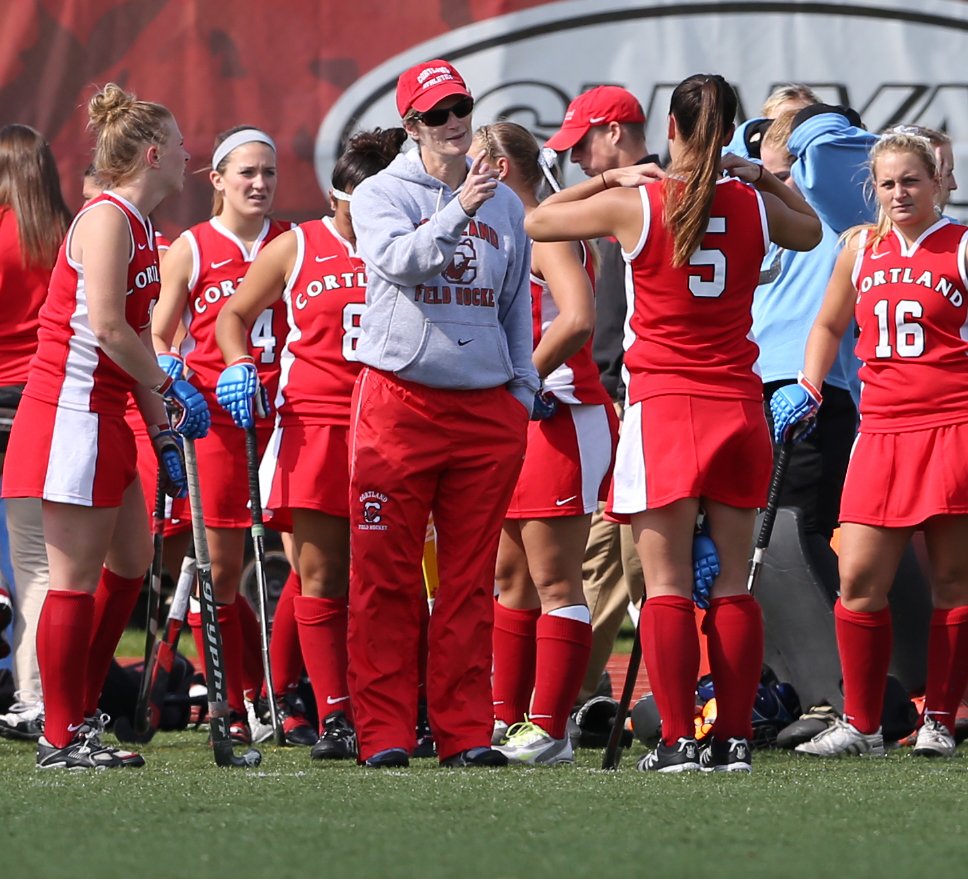 “It’s very exciting,” Wetmore says of the induction. “It’s a sport I absolutely love.” However, she is hesitant to take the credit. “I didn’t win this by myself. There were so many people — my family, friends, the athletic staff and coaches, the players and their parents — it’s not just about me. I couldn’t have done it without their support and their hard work.”

Still, she has led some incredible teams. Her field hockey players have won numerous contests, including the 2001 NCAA Division III National Championship and 13 NCAA tournament appearances. They made three trips to the Final Four and took home 13 SUNYAC titles. Her SUNY Cortland lacrosse teams were also legendary, playing in nine NCAA tournaments, including the 2006 NCAA Final Four.

Wetmore played field hockey in high school, but when asked why she chose to enroll at Herkimer College, she laughs. “Actually, I think my mom chose the school. I had been contacted by Coach Jeanne Galvin, and I remember taking one of those high school bus trips to the college.” For Wetmore, another part of the decision was that she would be able to play three sports:  softball, women’s basketball, and — her favorite sport — field hockey. “Since fifth grade, I knew I wanted to be a physical education teacher. So the fact that Herkimer College had a transfer agreement for their physical education program to other New York state colleges was also part of the decision.”

Galvin was a major influence on Wetmore, both during her time at Herkimer and in her own coaching roles. “She really set the stage for me. Not just for playing field hockey or basketball, but she laid the foundation for my success as a coach.”

Coming from small town Beaver Falls, Wetmore also says she appreciated the closeness of the students and staff at Herkimer. “Everyone was very supportive. My fellow student-athletes and coaches — it set a course for success.”

While on the field hockey team at Herkimer College, Wetmore scored 46 career goals and was named to the All-region Team, won the Region III Championship, and competed in the NJCAA national tournament. She was named Field Hockey MVP, first team All-Region, first team National Tournament, All-American, and Herkimer College’s Athlete of the Year in 1979-1980.

Another of her favorite memories was traveling to England with the team, an opportunity provided by Coach Galvin and Coach Meagan Mihalko. “Playing internationally and learning from their coaches helps to develop your skill and knowledge,” Wetmore says. “Field hockey is the second most popular team sport in the world, so when you play internationally, you really see the difference in the sport.” After becoming a coach, Wetmore took her high school and college-level field hockey teams to Europe and Australia.

After Herkimer College, Wetmore earned a field hockey scholarship to the University of Rhode Island. “That was yet another thing [Herkimer College] provided for me,” she says. At URI, she also played lacrosse, which put her in good stead to coach the lacrosse team at SUNY Cortland several years later.

Wetmore earned her master’s degree in 1985 at Southern Illinois University and began her coaching career at the same time as an assistant coach for the women’s field hockey team. She later moved back to New York and took a position in the North Syracuse School District, starting the first lacrosse team at Cicero-North Syracuse High School. Wetmore grew the program into a two-time New York State Championship team (1995 and 1996) before moving to coach the varsity field hockey team. “The girl’s field hockey team hadn’t scored a goal in years and hadn’t won a game in even more years,” Wetmore recalls. But Wetmore loved the sport, and she set out to coach her students. “I remember when they got their first goal — the players, the parents, everyone went crazy. The joy on their faces — it’s one of my all-time favorite coaching memories.”

In 1997, Wetmore became the head lacrosse coach at SUNY Cortland and the head field hockey coach the following year. “The students at Cortland were very driven, very talented.” One of her favorite memories of coaching was taking the Cortland field hockey team to the national championships in 2001 — Wetmore is the only Herkimer College alum to have done so. “It was great — that team, the emotion, everything coming together. It’s one of the beauties of coaching. Setting goals, working hard, and accomplishing those goals. Win or lose, you stay together.”

Wetmore knows she owes a great debt to Herkimer College. “It’s one of the best decisions of my life. The support, the community — it was life-changing for me. Coach Galvin, the other coaches, and the staff,  I want them to know that I’m thankful for them.”