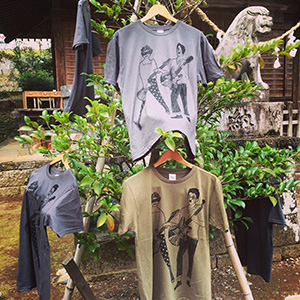 RYO IINO ‘00 IS A FASHION INDUSTRY SUCCESS STORY. During his 17 years of living in the United States, Iino has worked with many of the “names” in the industry, including Shaneen Huxham, Keanan Duffty, and the owners of Limited Brands. Now relocated to his native Japan, Iino continues to collaborate with New York City artists and designers as he runs his own silkscreen business – BPLJ, an enterprise offering a variety of graphics on apparel and prints on other mediums.

Iino’s story began at Herkimer College, where he majored in Fashion Buying and Merchandising. One of his favorite memories of Herkimer College? “The view from the entrance of the Classroom/Administration Building.”

Jenny recalls Iino fondly. “He was particularly adept with balancing work and play,” she says. She especially remembers Iino traveling through the December cold across New York City to her hotel to show her the garments he had designed and made. “We were astonished that he rode his bike to see us, and how gorgeous his work was!”

After Herkimer, Iino studied at the Fashion Institute of Technology in New York City. There he worked with Shaneen Huxham, who he’d met on the field trip a few years earlier. After college, his first job was as an assistant designer at Keanan Duffty; he then moved on to work at Limited Brands on the Henri Bendel Line.

But after 17 years of living in the US, Iino took on a new challenge. “While I was studying apparel and women’s clothing design, I became interested in graphics,” he explains. “Then I found one of the ways to combine graphics with apparel was silkscreen printing. I taught myself how to process silkscreen.”

Iino moved back to his native country of Japan where he and his wife set up a silkscreen business, BPLJ (www.bplj.org/). This proved to be one of the most difficult parts of his new venture. “Hand silkscreen is not big here,” he says, so breaking into the market is difficult. Another challenge is the business end of the project. “I am taking care of all the work by myself, from designing to marketing,” he admits. “I cannot think of anything easy about it.” But Iino is confident. He is still in contact with the designers he worked with in NYC, and plans to work with them in the coming year. His ultimate goal is to produce garments from patterns and to have a runway show.

However, he is quick to thank Herkimer College for helping him along the way. “Thank you very much to HCCC who gave me many opportunities to succeed!”