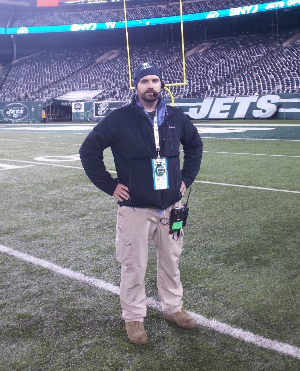 “I’m the stage manager at ESPN,” Metzger explains. “I’m very hands on, making sure everything is in its place…I’m mostly behind the scenes.

“I’m in charge of every aspect of the studio. The anchors look to me for guidance. If someone makes a noise, or if someone isn’t in the right place, it’s my responsibility. ESPN is a sports network; we are constantly adapting in today’s culture and we pride ourselves on delivering a fun, entertaining, and professional product. It’s my job to make sure the talent is always comfortable.” Is the stress level high? Metzger admits that the studio can be a demanding place. “It’s my responsibility to make sure the anchors have [the information they need] and that they don’t end up looking funny or silly on camera. The stress is something you learn to live with. It’s ok.”

Metzger did not have the straightest road to ESPN. Before attending Herkimer he served in the Marines. “I was in Iraq twice. When I got home, I… wanted to get away from work for a while; to go to college. I was older than most students; older than the 18 year olds and 19 year olds, so that was interesting.”

Metzger chose Herkimer, and he has never regretted that choice. “HCCC and my photo tech degree helped get me in the door [of ESPN]. It was very important.”

Photography professor Gale Farley remembers Metzger vividly from this time. “He was not too long out of the Marines, and I thought he was a bit guarded, like he might of thought that he did not fit in with the average students. It took a little while for him to open up, and get into the program, but he did.”

Ironically, Metzger did not play sports at Herkimer. “I spent most of my time in the photo lab,” he admits. Metzger recalls Farley influencing him greatly. “He opened my eyes to what you can do with photography. A selfie is a selfie, right? But Professor Farley showed me how to make a photo stunning.”

Professor Emeritus Janice Jenny also influenced Metzger. “She is a great person, with great knowledge and a great heart,” he recalls.

At Herkimer, Metzger grew from a young man finding his way, to a person ready to succeed. “By the time he completed the program he was a good student, a class leader with a positive outlook and a plan to go on with his education and his future,” Farley explains. “I feel privileged to have been a part of his journey and am very proud of his accomplishments. I truly enjoyed the time I spent with him.”

From Herkimer, Metzger attended SUNY Polytechnic, where he earned a degree in Business Administration and Management. “I would recommend to every student to go on and get a bachelor’s degree,” he says. “HCCC and my associate’s degree were a good building block. It’s what got me in the door [at ESPN]. But I still needed a bachelor’s degree to fulfill the position requirements. In today’s world, you need to have at least a bachelor’s degree, even a master’s degree. Don’t let anyone tell you to stop after earning your two-year degree.”

Even after earning his bachelor’s degree, however, Metzger did not simply land a job with ESPN. He worked as an associate manager at Hertz car rental for a few years, then set his sights on ESPN. “I went on a tour of the ESPN studios and fell in love with the culture, the work,” he explains. “I love sports.”

He then began applying to ESPN—for two years. “I had an interview in commercial communications as an on air promotions coordinator,” he recounts. “I didn’t get that job, but they liked me.” About six months later, ESPN contacted him for another position in the same department. “I worked for 30 hours a week. I had to prove myself.” Another three months later, the company hired him full-time.

From these humble beginnings, Metzger moved up to television production. From there, he could have become a producer. But he chose directing, explaining, “Producers create and develop content, then schedule a rundown (show guideline). I’m more hands-on; I want to direct what it looks like. Directors interpret and execute the rundown to deliver a story that is aesthetically pleasing and fulfilling to the viewer. I chose the path of directing because my passion for film and leadership allow me to put my creativity on air. I’m rarely in front of the camera, but I often say, ‘any closer to the camera, and I am in front of it.’

“My hands-on style and work ethic has made me very successful in the studio directing field,” Metzger admits. “I’m an average guy who works with professional athletes and movie stars. Working with these people has given me self-fulfillment that a regular job would not. I feel so successful, coming out of HCCC and SUNY Polytechnic, and everything. If you take it seriously and work hard, you can go into television, or whatever you want. You can do anything.”