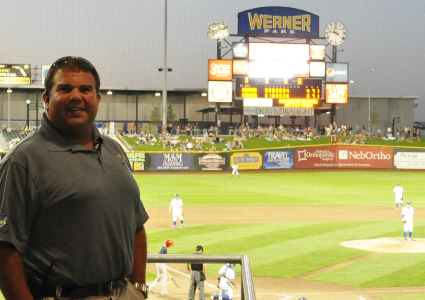 “When I went to Herkimer County Community College,” says Jason Kinney, “I knew what I wanted to do for the first time in my life.” That vision led him to a different city, a different state, and a different profession – working with the Omaha Storm Chasers, a Triple-A affiliate of the MLB World Series Champions Kansas City Royals, the Pacific Coast League baseball team which won two of the last three Triple-A National Championships.

“I’m a small-town guy,” Kinney says. “I was born and raised in Frankfort, New York. After high school, I had no plans to go to college.” He worked at APAC in Utica for a year, then, in July, 1999, he had a life-altering encounter.

“Hillary Clinton came to Utica… it was probably history-making,” he recalls. “I didn’t get there in time to get into the speech, but I stayed close by, hoping to catch a glimpse of her. When she came out the side door of the nursing home, she started walking straight toward me. I was the only young person she’d seen since she announced her intention to run for senate a few days earlier. She asked me questions that no one had ever asked me before; ‘Why aren’t you going to school? What do you plan on doing with your life?’ We talked for a while, oh, maybe 10 to 15 minutes.” That conversation changed his life. Later, Kinney would go on the campaign trail with her.

The conversation made Kinney think for the first time about what he would do with his life. So Kinney registered to attend Herkimer County Community College for a degree in photography. “Gale Farley was my advisor, my mentor. We had a lot of discussions about what I wanted to do.” His other memories of Herkimer College revolve around the close community of the college. “It was almost like a bigger high school – you had friends, cousins in almost every class.  We still used 35 millimeter; digital was just coming in during my senior year. So lots of memories of darkroom stories and the photography club taking trips to New York City.”

After earning his associate degree in photography, Kinney knew he wanted action. On the campaign trail with Hillary Clinton, he gained confidence. His brother Frank went to the University of Nebraska in Lincoln (’92) and invited Kinney for a visit. “They had the program I wanted – the college was just like HCCC and I fell in love with it; I saw myself in PR and marketing. I welcomed the change, and started over.”

While working on his bachelor’s degree in public relations at the University of Nebraska in Omaha, he and three classmates decided to intern with the Storm Chasers, then known as the Royals. “We wanted to work with a professional team; to learn about the sports industry,” Kinney explains. Kinney would later work as a paid intern for the general manager, and his three friends would go on to work with the San Diego Padres, the Colorado Rockies, and a major event planning firm in Omaha.

From paid intern, Kinney worked his way into director of merchandising for the Storm Chasers.  “I got to be creative; to bring new items in throughout the season and new ideas because I was younger,” he explains. “I developed a new customer base with the season ticket holders and saw profits rise. When they closed the famous Rosenblatt Stadium, I got to create products branded with the Rosenblatt final season logo. Then I got to create the new merchandise store at Werner Park, which opened the following year.”

After five years of merchandizing, Kinney was ready for a new challenge. In 2012, he became more involved in corporate sales for the Storm Chasers, and now sells advertising for the ballpark. “Most of the contact is cold calling,” Kinney says. “I listen to the companies’ needs and give them a proposal based on the dollars they have to spend.”

Not only has Kinney worked for nearly 10 years for the Storm Chasers, he also rubs shoulders with the rich and famous. “I’m friends with a lot of country music people – Luke Bryan, Keith Anderson, Blake Shelton, and others. That opens up doors to other opportunities. The team was once owned by Omaha’s own Warren Buffett up until a couple years ago.”

Whether he’s cold calling Fortune 500 or smaller companies for advertising deals or following leads in the sports and celebrity industry, Kinney won’t be forgetting his small beginnings – or his first college in Herkimer, New York.