The Sound of Success 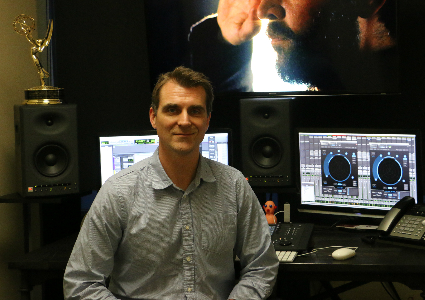 “THERE ARE NUMEROUS WORDS TO DESCRIBE WHAT I DO,” SAYS JEFF MULLEN, RADIO-TV BROADCASTING GRADUATE. “I USUALLY SAY I’M AN AUDIO ENGINEER OR A SOUND DESIGNER. I WORK RIGHT NOW IN BROADCASTING AND MOST OF MY WORK IS PRIMARILY
IN COMMERCIALS AND PROMOTIONAL CAMPAIGNS CALLED PROMOS.”

While it sounds straightforward in that sense, Mullen’s work boasts prestigious names like Discovery Channel, TLC, National Geographic, ESPN and PBS as cable television clients, along with commercials for Little Caesar’s, Rosetta Stone and Pepsi. “I also do some long-form television shows, some web, some corporate videos,” Mullen says, trying to think of the many facets of his work. “Really anything that would require an audio element that is tied to video, I’ve probably done.”

After 20 years in the audio production business, Mullen still remembers how it all started at Herkimer. At the time, his pursuit was a music career, not production. “I was looking through the catalog back then and I saw Radio and Television Broadcasting,” he recalls. “It had some of the components I thought I’d be interested in and decided to give it a shot. That’s how my Herkimer story started.”

Mullen never dreamed of a career in sound design in particular, but he found the creative outlet he was searching for in the audio labs at Herkimer. “I saw how some of those things I was learning could translate into what I thought I wanted to do in my music endeavors. I really got involved in working in the labs; I was able to tap into a certain level of creativity that I didn’t even realize was there. I enjoyed the audio production side. That was my favorite part of being [at Herkimer].”

The audio design that Mullen specializes in works because of his musical inclinations. “It’s subtle,” Mullen explains, “But it’s one of those things that if you take it away you realize how much it affects those products. I work very rhythmically; my background is as a musician. I’m a percussionist, so I have a rhythmic sense in everything I do even if it’s very subtle. When I get the opportunity to lean on that knowledge I really enjoy it. It’s become my style and the way I can express my creativity.”

That creativity has led to an Emmy award for sound designing PBS’s 2014 Fall Preview promo campaign. “Basically, there are broadcasters who will put together a package of promos for what they have to offer for the upcoming season. That’s what PBS did, they had numerous promos within this promo campaign.” says Mullen. “I did the sound design and mix for those. It says on the actual award ‘Sound Designer/Mixer’.”

Mullen continues to work through his own company, Sonichead, but he hasn’t ruled out embarking on new projects with an open mind. “The ability to adapt to change is paramount in the media world. I’ve done video editing, I’ve directed, I’ve run cameras, I’ve done about every job in media there could possibly be,” he says. “I landed here in this macro-unique world that is audio mixing, but it’s not to say I couldn’t try other things.”