Class of 2018, Sports and Recreation Management 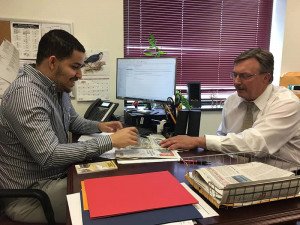 For a first generation college student from the Bronx, coming to rural Herkimer took some getting used to, but Juan adjusted easily. He also wasted no time getting involved in activities on campus. Passionate about sports and politics since he was a young boy, Juan chose to major in Sports and Recreation Management, and he served as vice president of the Student Government Association. In his final semester, he landed an internship with New York State Assemblyman Brian Miller.

Given his background and that his parents were immigrants from the Dominican Republic, Juan was able to provide Miller and his staff with a different perspective on life and legislation. “Juan helped us understand the immigrant’s experience,” said Miller, referring to their discussion regarding the Dream Act, a measure that would make education aid available to children of undocumented immigrants. For Juan, his work with Miller has helped him learn about all types of people and to be open to a variety of ideas and positions. “Juan came here as an idealistic young man, not really analyzing issues from all sides. He’s able to look at all sides of an issue now,” said Miller.

Throughout the internship, Juan was involved with research projects and responding to constituent concerns. He also had an opportunity to travel to Albany with Assemblyman Miller to experience a day on the Assembly floor.

Upon graduation from Herkimer, Juan was accepted to seven schools, and he chose to attend Seton Hall. He would love to run for political office in the future. As for Assemblyman Miller, he hopes to have more hardworking and open-minded interns like Juan join his staff in the future.

Juan has gained a lot from his experience, and has appreciated getting to know the people behind the politics, and realizing they are not how they’re portrayed. “My biggest takeaway has been getting to know that they’re actual humans, people who want to do good work and are fighting for people in their districts.”