To Douglass, Herkimer was more than just a college—it was a family. 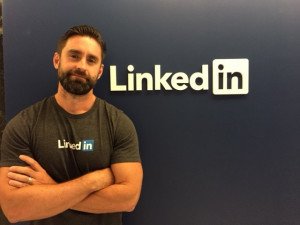 Douglass’ career has been varied, but it centered around sales and was heavily impacted by his time at Herkimer College. He first worked at Xerox as a sales rep and sales manager for nine years, first in White Plains/Westchester, then Albany, and finally in Rochester, New York.

But Xerox was experiencing growth pains, and Douglass was caught in one of the layoffs. “It was actually the best thing in the world,” he says. Moving back to New York City, Douglass started over at a small e-mail marketing firm. Then one of his former sales interns at Xerox referred him to the social media platform LinkedIn.

LinkedIn is the world’s largest professional network with more than 562 million users in more than 200 countries and territories worldwide. “I had no idea there were sales roles at LinkedIn. I thought it was only a company for engineers and people keeping the site up.” Douglass is currently a sales manager working with companies to leverage the social platform.

“I work with companies to leverage LinkedIn as a sales tool to find prospects and position themselves as sellers. I think what’s so much fun about it is helping companies and sellers to be educated and strategic. . . social media is a part of everyday life now. . . I help sellers engage buyers at the right place and the right time.”

But Herkimer College has a special place in his heart, and it all began with the soccer team. “There was such a camaraderie with the teammates, such friendship. So many of those friendships were for life. We had to be at the college two to three weeks early for soccer practice. We were the only ones there; we were training together, eating together, going back up to the top of the hill together in the evenings. It created an unbelievable brotherhood.”

He also proudly remembers that both years he played at Herkimer College, the soccer team won the national championship.

After graduating with an associate degree in Liberal Arts: Humanities, Douglass transferred to Virginia Wesleyan College (now Virginia Wesleyan University). He described the transition as challenging after having experienced the family atmosphere at Herkimer.

Douglass also was one of Herkimer’s first online students. “It was biology,” he remembers, “and it was so strange because they sent you a kit, and then you had to send it back to the college. It was so challenging because it was non-traditional. I didn’t have to go down to the college every day. Time would slip away, and then I’d remember, ‘Oh, wait, I have to go online.’ It was only 2000 or 2001. I wasn’t very astute with the internet then, which didn’t help.

“There was a forum, sort of like Reddit, and it was one long strand of conversation. If you didn’t sign in every day, you’d be so far behind you couldn’t catch up. The tests were online, too. It was a pretty unique experience; cutting edge at the time. It’s come so far since then.”

For Douglass, the friendships made at the college have gone beyond time. “I was in Midtown [New York City] during rush hour a couple years ago,” he recalls, “and of course there’s traffic and people all hurrying along. And suddenly the sea of people parted, and there was one of the soccer teammates from Herkimer. So there we were in the middle of New York City, catching up like we had seen each other yesterday.

“Those friendships were for life,” Douglass says again. “It’s one of the things that makes Herkimer College special – that makes it stand out from other colleges.”