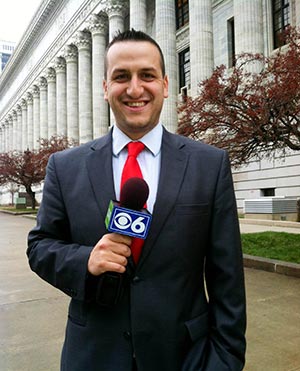 “I think I was maybe 10 years old. I was watching the Yankees game and I turned down the volume on the game and pretended to be the play-by play announcer, and I think that’s when I first knew that’s what I wanted to do.” Thus began Pat Bailey’s media career. From soccer game coverage at Herkimer to reporting on the Boston Marathon bombing, Bailey ‘03 has cultivated quite a résumé for himself. As the current assistant public information officer for the New York State Department of Corrections and Community Service, he deals with the media from a public relations standpoint on a daily basis, but that wasn’t necessarily his original intention.

Bailey enrolled in the Herkimer College Radio- Television Broadcasting program in 2001, eventually transferring to SUNY Oswego to continue his education. While at Herkimer, he was an active sportscaster, just as he had hoped to be as a child. Along with working with the college news, he was an employee at WUTR-ABC in Utica at the same time. Those next seven years found him reporting for various news stations in Utica, Syracuse and Albany, which eventually led him to the New York Post and a prestigious position as a capitol correspondent.

As a graduate of Little Falls High School in Little Falls, NY, his media studies began soon after at Herkimer. “I knew some SUNY schools had Radio- Television programs, but no one was doing what Herkimer was doing,” Bailey says, commenting on his decision to choose Herkimer over anywhere else. “Broadcasting games live, doing play-by-play and color commentary, not just on campus but reaching out to Herkimer County and the public access channel, too.”

The classes were hands-on and focused on producing tangible outcomes with equipment that news stations expect prospective applicants to know, and that’s something Bailey claims was a real asset as he moved from school to the working world. “The hands-on classes were really the best. The professors were good at what they did and taught in simple ways. I was able to get a job very easily because I knew what I was doing right out of Herkimer.”

Now a thirteen-year veteran in the media business, Bailey has learned a thing or two about what it takes to make a name for yourself. “Gone are the days where you’re a reporter, and you show up at 9 o’clock in the morning, you’re handed your assignment and you leave with a photographer, go to your assignment for the morning, and then you come back and you’re done for the day. In this day in age, you had better come ready with some tips and ideas to show the news director at the morning meeting. Then if you’re lucky enough to be assigned a photographer, you head out and you’re responsible for at least two different versions of one story for TV, another for your website, and then possibly something else for your Facebook or your Twitter.” The nature of media is changing, he says, along with technology and the focus of your audience, bringing with it new challenges that he has had to adapt to as the years progressed. “Learn as much as possible, because anybody who just knocks on the news station’s door or newspaper’s door or whatever it is you want to do, and is multitalented, will certainly have an edge over somebody else. Even in thirteen years the business has changed, a complete one-eighty, and it’s changing every day.”

The dynamic nature of journalism is something he always enjoyed, with the ability to go to work and do something different each day in a different place. His travels took him around the state and around the country, from following Syracuse basketball for an NCAA tournament through Salt Lake City and Cleveland to hitting New York City covering a story on the visiting Pope. The scope of his work hasn’t escaped him: “Just to be a journalist, this kid who grew up in Little Falls, and all of a sudden I’m doing a live bit for CNN or for the Weather Channel,” he says, “It’s just incredible what I was able to do.”

Despite enjoying his current position, Bailey admits that he has other ideas on where he can go and what he’d like to do someday. “Eventually I want to do something fun and do Public Relations for the New York Yankees or the Buffalo Bills, or work at a firm for Pepsi or something cool. I think having the media background and getting the experience now on the other side of the business, if you will, will hopefully be an advantage and I’ll be able to do what I want to do.”

So, what’s in the cards for Bailey as his career continues? “The way I look at what I’ve done, I’ve done everything I think I can do. I was a reporter in my hometown, not many people can say that and be proud of that. I was a reporter in the capitol of New York State, and a reporter for the largest market in the country, the New York Post, and looking back I think I’ve had a heck of a career in just a short time. I think I accomplished everything I wanted to accomplish,” Bailey says. “Now it’s just time to move on to a different chapter.”