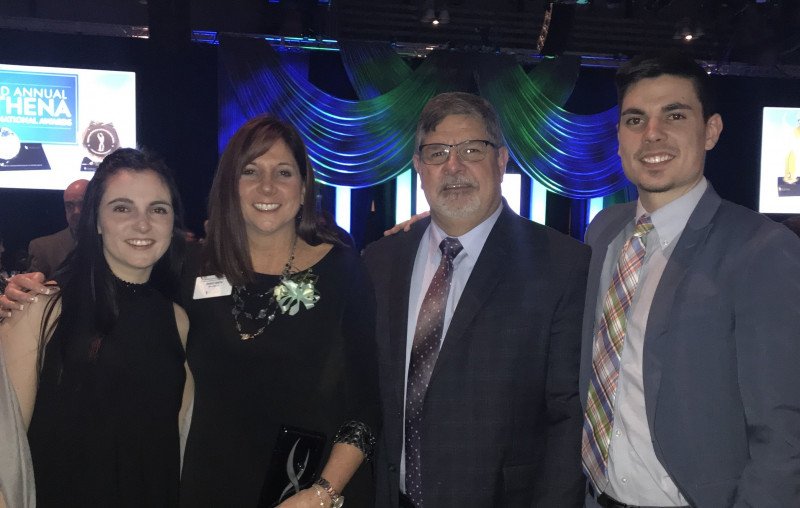 In early 2019, Bridget Martin ’88 was named a finalist for the ATHENA Award by the Greater Rochester Chamber of Commerce and Women’s Council. The award is given each year to a deserving female for her demonstration of significant achievements in business, community service, and the professional advancement of women.

Martin was humbled and honored to be considered a finalist. “We work with a lot of short term commercial real estate lending [at Monroe Capital],” she explained. “Being a female in finance, I am a minority. I have taken great pride in mentoring young women in that field. One of the reasons I was chosen as a finalist for the Athena Award was a result of my efforts in mentoring young women I worked with and creating female centered programs for the Turn Around Management Association. My goal was to increase female participation and understanding in a male dominated field.”

Previously, Martin provided on-site travel services for Bausch and Lomb. “We were one of the first agencies to have a home office inside an organization,” she says. She traveled extensively for the company, but quit when her children were born. “My former boss came to me and said, ‘Could you come back, part time?’” She complied as his executive assistant which included, facilitating the travel advisory committee. “We’d get the key clients together monthly in a collaborative group to brainstorm different ideas with the purpose of learning from each other and helping all parties to be more productive.”

Martin was a travel and tourism major at Herkimer. “There were so many good times; so much that was instilled in me there, I still carry with me; so many friendships – I still keep up with the people I met there.”

On her first college visit, Martin met Jean Stapleton who ran the Travel and Tourism program. “She said, ‘Why do you want this degree?’ And I didn’t really know, but you know the era, so I replied, ‘Well, I like Love Boat.’ She said, ‘If you want to be Julie McCoy, you’ve come to the wrong place.’ But she explained what I could do with the degree, how it worked. We really hit it off. Professor Stapleton became a mentor and strong female role model to me.”

Her memories include the fun and the unusual. “I was in typing class, and my ring fell off and fell into the typewriter. The teacher couldn’t believe it; they had to take it apart to get my ring out.”

One of her fondest memories was of Professor Emeritus Ray Lenarcic. “He taught a class about American Indians. He encouraged us to participate in a fundraiser in the form of a walk for local veterans which took place on a Saturday. It was incredibly interesting to interact with the veterans and understand their perspective.. He was very good at opening our eyes to more than the subject matter of the class he taught.”

In her spare time, Martin volunteers for not-for-profit organizations, including Leukemia and Lymphoma Society, Spencerport Education Foundation, Turn Around Management Association, and the Ronald McDonald House. “My parents were very active in the community,” she says. “I guess by now, it’s pretty much second nature to be giving back to the community.”