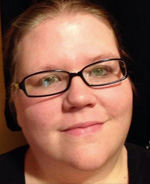 Airian Eastman of Freeville, NY is enrolled in the online Paralegal program at Herkimer College. A nontraditional student, Eastman studied at Tompkins Cortland Community College while also working in childcare for 15 years, she decided to return to school to complete a degree in paralegal studies.

Eastman chose Herkimer College because it is one of the only SUNY colleges that offered a paralegal studies program entirely online. It would have been difficult for her to commute to school every day so it was important that she find the program she wanted completely online.

Eastman wanted to be able to support her family so she chose paralegal studies because it is listed as a growing field. It also appealed to her because she is a writer. “I love reading, writing and learning research, so a writing degree was right up my alley,” said Eastman. Eastman has been surprised by many of her experiences as a Herkimer College student. With online classes, she expected there to be minimal interaction between her, her classmates and her professors. She was pleased to find that this was not the case. “They really brought more to the table than I expected,” said Eastman. “The teachers interacted a lot with their students, and the idea that I do could that, although I was an online student, really appealed to me.”

As a returning adult student, Eastman is committed to completing her classes and earning a degree. Although she was unsuccessful the first time in college, she had been a good student in high school, so she knew she had the ability to succeed. Upon enrolling in Herkimer’s Internet Academy, Eastman set many goals for herself and was determined to do as well as she could. Her hard work paid off, and she enrolled in the Honors Program upon completing her first semester.

The Herkimer College Honors Program is an enrichment opportunity for academically inclined students with an overall GPA of 3.5 and higher to explore an area of interest with a college mentor of their choice. The program gives students the opportunity to grow intellectually and creatively to enrich their individual talents through the completion of an Honors project.

Eastman’s Honors Project was part of a larger mission for her. She has been working with a local community center which allows both children and adults to attend. Since there have been issues with seniors allowing children in the building, she is helping children learn about volunteering and giving back to the community in an effort to bridge the gap, with the hopes that the seniors will be more inclusive. So, her project was to get the children to make Valentine's Day Cards to give to the seniors. She said it was successful.

“It taught me a lot about myself and what I can do for the community and how I can contribute as an adult,” Eastman said.

As a student, Eastman is most proud of being able to focus her time so she can be as involved with the school as much as possible. She was elected as senior student senator for the Student Government Association in the fall 2014 semester, but was not able to continue in the spring due to the driving distance. Eastman is currently working on ideas to present to the College that may help online students become more involved on campus, and she hopes those who have a desire to get involved will have more ways to do so.

From the start, what has stood out most to Eastman about Herkimer College are her professors. Her Anthropology professor, Jeff Steele, also became her supervising mentor for her first Honors Program class. “I enjoyed the way he approached his teaching,” said Eastman. “If I had a question, he was quick to answer and was always encouraging me to do better and to figure out what I need to do to improve.” She appreciated that he was there for her and was always quick to respond. She also appreciated her paralegal studies professors, Colleen Kehoe-Robinson and Paul Dusseault, who worked hard to help her understand material that was new to her and help her feel welcome in the program. They also recommended Eastman for an internship at a local law office where she is currently working. “I just think that despite never having met any of them face to face that they were willing to help me out and are inspirational teachers,” Eastman said.

As a writer and volunteer, Eastman continues to market and promote her self-published book and plans to continue writing her second fiction novel. After graduating from Herkimer, she hopes to find a good paralegal job close to home and continue to write and volunteer in the community. Advice that Eastman would give to her fellow students would be to set achievable goals. “As much as it’s nice to think we can all reach the top and be successful, sometimes we’re not,” said Eastman. “My previous attempts at school are an example of this. Once you set a meaningful goal, you can then work your way up to set higher ones. If you don’t have a plan it is not likely to happen.”