Life of a Student Athlete 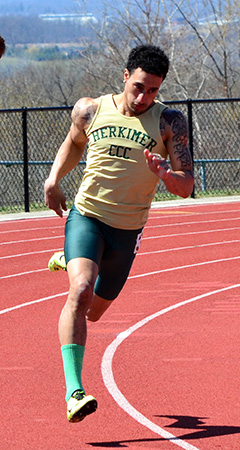 The life of a student-athlete is as challenging as it is rewarding, and no one understands better than Wendall Williams, a former two-sport athlete at Herkimer College. Williams, a graduate of Bishop Ludden High School, had a goal to win a national championship. The one thing that challenged him in doing that wasn’t his athletic ability--it was the academics. “My grades were bad everywhere before I came to Herkimer,” said Williams. “I didn’t have the proper mentality when it came to my school work.”

Williams had a 1.1 GPA after his freshman year at Morrisville State College, then made stops at both Onondaga and Hudson Valley before landing at Herkimer in 2012. Williams credited the turnaround to his maturity and the environment offered at Herkimer College. “Athletes need people they can relate to. Coach (Matt) Lee was like my older brother and Coach (Sharon) Howell was the motherly figured I needed. Without the opportunities and knowledge they gave me, I would not be where I am today.”

Williams is now attending University of the Cumberland in Williamsburg, Kentucky on a football scholarship and studying Exercise & Sports Science. Helping Williams get noticed by the Patriots were six individual national championships in track & field and a Chancellor’s Scholar Athlete Award, all earned at Herkimer College.

As a sophomore, Williams collected four national championships in the 100-meter, 200-meter, long jump and 4 x 100 Relay, and as a freshman, he was a national champion in the100-meter and long jump for the Generals. Williams’ achievements extended into the classroom, evidenced by his Chancellor’s Scholar Athlete Award recognizing a combination of outstanding academic excellence and superior athletic achievement.

At age 23, Williams knows he still has challenges ahead of him. However, the path to success, which used to be blurry, has gotten clearer for him. And he seems to be transitioning well, earning second team All-Conference honors as a junior for Cumberland after being five years removed from the sport. His on-field success has him aiming to play ball professionally, but should that not pan out, coaching would be the other option.

“I’m still trying to put it all in perspective, even today,” said Williams. “I want to make sure everyone knows where I came from, and Herkimer has helped me more than anyone, realize what I have to do. I’m ready for the next step!”