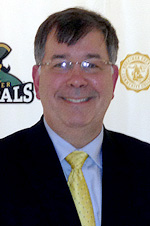 William M. Gregory of Frankfurt, was appointed to the Herkimer College Board of Trustees by the Herkimer County Legislature in 2013, with his term to expire on June 30, 2026.

Mr. Gregory is an Electronic/Computer Engineer at the Air Force Research Laboratory (AFRL) in Rome, NY. He served in the Air Force as an officer from 1984 to 1989, stationed at the Rome Air Development Center (RADC) as a computer systems engineer. Departing active duty, he became a civil servant at RADC and continued his military service in the Air Force Reserves until July 1, 2012 when he retired at the rank of Lieutenant Colonel. Mr. Gregory holds a B.S. in Electrical Engineering from Georgia Institute of Technology and an M.S. in Computer Engineering from Syracuse University.