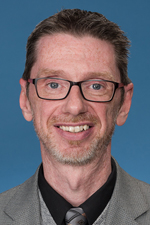 Mark M. Ainsworth, O.D., of Herkimer, was appointed to the Herkimer College Board of Trustees in 2015 by Governor Andrew Cuomo, with his term to expire on June 30, 2022. Dr. Ainsworth is owner of Herkimer Eye Care Center and is a board member for the Village of Herkimer.